The 2013 campaign itself was laudable in its objectives and execution, but beyond that, the new push bolstered an ongoing effort by the airline to encourage conservation and ecological awareness.

Here’s how the airline describes its efforts:

Directly after the storm, JetBlue coordinated several efforts to provide immediate assistance to New York’s tri-state area and encouraged customers to donate $820,000 for relief efforts to the American Red Cross with a match of $100,000 coming from the airline. Six months after Hurricane Sandy, many parts of the New York metropolitan area were still devastated. … To meet the need of both communities and New Yorkers, JetBlue dedicated the 2013 One Thing That’s Green campaign to supporting the revitalization of Highland Park … as it had been severely ravaged during the storm.

The media coverage gathered by this was impressive by any measure. Results included:

We congratulate all those involved with orchestrating and publicizing the event. The planet thanks them, too. 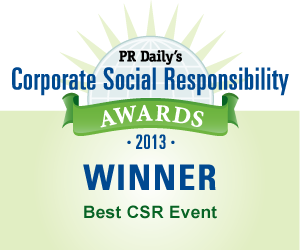