Safety had been slipping at the chemical company FMC.

So, the company launched a long-term, umbrella campaign aimed not only at reducing injuries and workplace hazards, but also at improving safety awareness among its global workforce.

The campaign worked well for several reasons. Of note, it was rolled out in phases, so that as initial aspects of the campaign became assimilated by the staff, new measures and guidelines overlapped the established awareness.

From FMC:
There are two measures to keep in mind when evaluating the campaign’s success:

1. Decrease in recordable safety incidents companywide: According to the top safety performance indicator, the total recordable incident rate dropped 15 percent from 2011 to 2012 and is on par to drop an additional 20 percent from 2012 to 2013. We’re on target to reach our 2015 goal [of a 50 percent decrease].

2. Creation of FMC safety advocates: A safety pulse survey conducted in April 2013 … proved that overall awareness among employees worldwide was exceptionally high—98 percent of respondents claimed familiarity with TH!NK.SAFE. … In less than six months after the launch of TH!NK. SAFE., nearly two-thirds had discussed it with friends/family outside of FMC.

Also, employees became the faces of safety efforts. A companywide contest solicited videos, and dozens poured in—some poignant, some humorous—bringing the campaign to a personal level and building community among the far-flung workers.

We congratulate FMC for its successful campaign—and for all the accidents that have been avoided because of it. 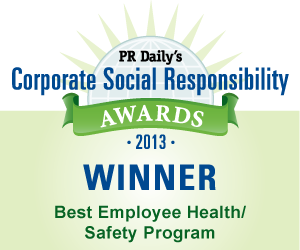