Walking through a city such as Chicago or New York, one could easily pick up a rock and throw it in any direction while likely feeling confident it would hit a restaurant or café offering patrons free Wi-Fi.

And yet any number of us could just as likely admit to having been annoyed when this complimentary connection access proved too slow for our personal preferences, or worse even, when an establishment dared ask that we actually buy something in order to obtain a password for access to it.

Perhaps to better put this “first world problem” into perspective, we should all look overseas at a country like Turkey, where citizens are lucky to have Internet access at all, let alone for it to be fast or free.

This is what Türk Telekom subsidiary TTNET, Europe’s fifth-largest Internet service provider and the largest in the nation, discovered when it examined research on the duality of Internet penetration within Turkey, an issue perpetuated even more due to regional inequalities among its people.

It was this discerning circumstance that prompted the company to launch its TTNET 360 Vision in 2013, a business initiative that looked at new means of extending its services beyond mere Internet access by offering solutions that would actually add value to its users’ lives.

One such solution took form in TTNET’s “Life is Simpler with Internet” campaign, which aimed to bring the benefits of the digital revolution to the entire nation while also helping the company reach and enhance its relationships in local communities.

Before beginning this effort, TTNET learned by way of a survey that 1.5 million Turkish citizens had never engaged with the Internet, a scenario leaving a number of them reluctant to even try.

In hopes of narrowing this digital gap in Turkey, the campaign focused on creating a widespread awareness about the benefits of Internet while providing communities with broadband access, as well as use of online education opportunities for self-development.

TTNET partnered with the Turkish Ministry of Transport, Maritime Affairs and Communications to help with the travel of specially equipped trucks venturing to new areas each month. This provided a mobile training platform to the campaign whereby people of each region could gain access to and hands-on experience with Internet training, with a number of TTNET employees additionally supporting the campaign as volunteers.

To date, 3,636 men, women, and children have been trained and certified through TTNET’s online literacy campaign, with 21.57 percent of these trainees using the Internet for the first time.

Additionally, 38.61 percent went on to acquire Internet access after the training, and 48.51 percent of the participants indicated that thanks to the “Life is Simpler with Internet” campaign, they can now use the Internet without outside help, providing increased personal space and freedom.

TTNET’s campaign didn’t simply provide that. It has also provided the company with the Grand Prize of CSR Campaign of the Year in PR Daily’s 2013 Corporate Social Responsibility Awards. 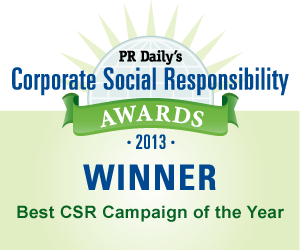