Raytheon—an important supplier to the U.S. military—has a longstanding record of support for veterans. In an effort to increase its emphasis on veterans’ issues, Raytheon’s communications team partnered with No Barriers, an organization committed to helping improve veterans’ lives through programs designed to increase their confidence in their abilities to deal with challenging situations. The success of this partnership has led to a first-place win for Cause Advocacy in PR Daily’s 2016 Digital PR and Social Media Awards.

The two organizations planned an eight-day expedition down the Colorado River for 10 wounded veterans. Raytheon had several goals for the project, one of which was internally focused: to move employees from passive observers of the company’s veteran-focused efforts to active participants.

It worked, with half the nominations for participation coming from employees and 100 staffers actually participating in a community hike to raise money for No Barriers. Another dozen employees appeared in a morale-boosting video screened for the veterans before the expedition began.

The program also expanded the pool of candidates for the No Barriers program while raising awareness impressively: The spotlight was cast on No Barriers and its goals and programs via mainstream media coverage and social media conversations.

Last but not least, the program had a positive impact on the 10 wounded veterans, all of whom completed the expedition. 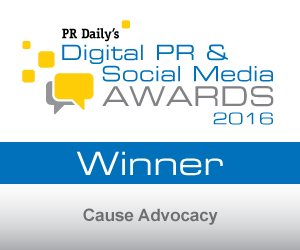