The whole idea behind a good gimmick is generating news and social media coverage, which means people and organizations need to find the gimmick interesting enough to commit resources to it. That wasn’t a problem for one contest sponsored by Woods Canada. It not only succeeded in its goals, it also took first place in the “Media Relations Campaign” category of PR Daily’s 2016 Digital and Social Media Awards.

The Ultimate Dream Job contest promised to take two couples on a five-month, 14-stop journey across the Trans Canada Trail, where they would experience hiking, climbing, paddling and portaging using Woods Canada outdoor gear. The competition, promoted with the #UltimateDreamJob hashtag, drew video entries from more than 3,800 hopeful contestants.

The selected “Woods Explorers” were announced in a national press release that instantly began producing media inquiries. A record-setting number of interviews were arranged with the Explorers (who also received $20,000 each), and local news media outlets anxious to cover the couples when they were in their local markets.

Coordination was uniquely challenging given the couples each started their treks on opposite sides of the country; twice the number of news inquiries had to be handled. Ultimately, 171 unique stories appeared in Canadian media outlets for nearly 41 million impressions.

More importantly, the company attributes an impressive sales bump of 27 percent to the program. 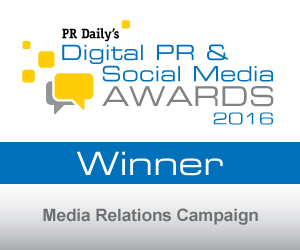