Chandler Chicco Agency, working with Novartis Pharmaceuticals, had an important goal to their TOBI Podhaler Facebook campaign: educating those suffering from cystic fibrosis (CF) about the importance of seeing their medication regimen through its completion. With Facebook as their mouthpiece, Podhaler created a powerful and human campaign, which earned them first place in the “Best Use of Facebook” category of PR Daily’s 2016 Digital and Social Media Awards.

Facebook was the perfect medium for the campaign, since

CF prevents those suffering from it from interacting face to face, making Facebook the perfect vehicle for the campaign. The campaign leveraged organic timeline posts as well as paid desktop and mobile ads to reach the avid CF community with important messaging about CF and its treatment. Most importantly, the campaign tapped prominent CF influencers—caregiver and CF advocate Margarete Cassalina and CF patient Julia Rae—to spread educational and inspirational messages to its audience.

Despite significant challenges, including FDA regulations that prohibited comments and likes of posts, the campaign boasted substantial growth in engagement and audience as a result of the campaign, including hundreds of positive comments from inspired individuals with CF.

Novartis Pharmaceuticals’ investment in providing real value to their audience in the form of inspiration and education established them as conversation leaders and genuine advocates for those suffering from CF. The Facebook campaign successfully transcended the product to spread human stories, which is ultimately what social media is all about.

Big congratulations to Chandler Chicco Agency on behalf of Novartis Pharmaceuticals Corporation for this incredible campaign. 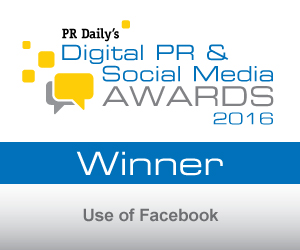