Rarely have the Ragan Awards picked a winner in its “Best Article Series” category that faced the imminent prospect of catastrophic damage—and lived to tell the story, triumphantly, not merely as a “survivor” but as a victor, stronger than ever.

That winner is Flash, the employee magazine of the Omaha Public Power District. Flash, edited by Paula Lukowski, tracked the epic story of the 2011 floods in bi-monthly issues from June through December.

The OPPD maintains three baseload power plants on the Missouri. That meant the OPPD’s struggle with floodwaters was grim and dramatic. At stake was power for a third of a million customers, and protecting more than $3 billion in hard assets—buildings and machinery.

Complicating this was the threat to the environment posed by the vulnerability of OPPD’s Fort Calhoun Station nuclear reactor.

Gary Gates, president and CEO of OPPD, said of this time:

“This was as close to being at war as we could ever be. We were at war with the river. We had people . . . on the front line making sacrifices. We had a supply group and a strategy group, and others were coordinating with cities, counties, customers and others.”

Lukowski ran stories about fighting the flood in the July-August and September-October issues, of course. But she gave it the full treatment in the November-December is of Flash. Ten full-length stories dealt with every part of the saga:

By any standard, this November-December issue delivers superior organizational reporting. The drama, the pressure to tell the full story quickly and accurately, the comprehensive reporting on almost every conceivable aspect of this fight to the finish, everything couched in the clearest, most readable prose—make this issue memorable and a decisive winner. 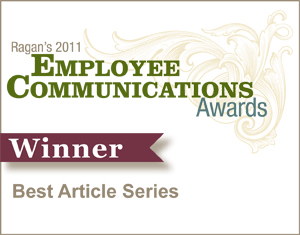