In 2011, the company tried a different approach. The firm planned to provide a bigger picture perspective, dubbed “blue-sky thinking.” It asked employees across the globe to record questions about where the firm will be in 2015, and enlisted an animator.

The result was a visually dynamic video, featuring not only the CEO, but the actual voices of employees in their native tongues. The video captured the 2011 Ragan Employee Communications Award for Best Interview Video.

Instead of simply shooting Waggener Zorkin, the team—which included a producer, artist, and two writers/reviewers—broke the video into segments, where the CEO answers each question.

The voice of an employee in his or her native language is played over a split screen. One side shows the animator sketching a cartoon of a person, while the other side is the question written in English. As Waggener Zorkin answers the question, the animator draws a series of images that are displayed on the screen.

It’s a truly creative and unique approach to the “talking head” video—and it paid off.

Within the first 24 hours, the video received 402 internal views—meaning 50 percent of all agency employees watched the video during the first day of release. A very successful agency intranet feature usually breaks 150 views over the course of a week, with the most popular agency videos traditionally recording a maximum of 80 to 100 views.

Beyond the numbers, employees said they enjoyed it, in exchanges with staff and on Twitter. One employee said: “This is easily the coolest, most engaging video I have ever seen us do. It’s awesome, and I am not done yet. A+ work—seriously awesome!”

Indeed, it seems Waggener Edstrom has reinvented the concept of the “talking head” video for internal audiences. 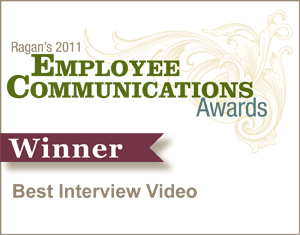