The purpose of any cover line is to draw readers in. It should have a little spice, enticing readers bored with bland, generic story titles. The U.S. Department of Labor’s FRANCES magazine, an internal e-publication, devoted its September 2012 issue to food, and the cover line for the story, which spotlighted “interesting” edibles that OSHA inspectors had tasted at least once, was “Is There Anything OSHA Inspectors Won’t Eat?” It’s attention-grabbing and intriguing, and it’s a first-place winner in Ragan’s 2012 Employee Communications Awards in the Best Cover Lines (Print or Electronic) category.

The line was only one of five on the publication’s cover, which featured a photo of Frances Perkins, secretary of labor from 1933 to 1945, dressed as a chef serving up a plate of pasta. Other lines included “BLS Employee Reveals: My Office Is a Supermarket!” and “Top Cops on the Food Beat.” The issue as a whole dealt with such food-related issues as ethical questions for employees at events where food is served and stories of courage on the part of employees investigating wage and safety conditions in stockyards, restaurants, and everything in between.

“Is There Anything OSHA Inspectors Won’t Eat?” turned out to be the most-read story in the September 2012 issue—a mouthwatering triumph for Carl Fillichio, senior advisor in the Office of Public Affairs and Communication; Cindy Riggs, art director; and Kate Krizan, senior graphics sesigner. Ragan Communications congratulates everyone involved. 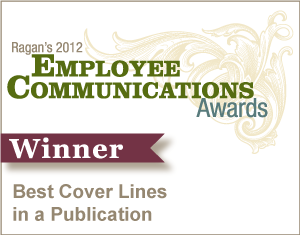