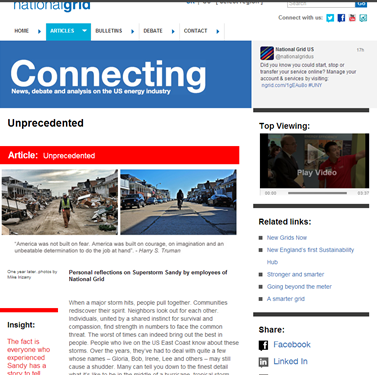 Hurricane Sandy slammed into the East Coast in late October 2012.

The superstorm’s effects were immediate and enduring. It destroyed billions of dollars of property and infrastructure, and it cost some people their lives.

Those in emergency capacities—police, firefighters, medical personnel—were pressed into service. So, too, were the men and women responsible for maintaining or restoring electricity and other necessities.

National Grid remembers well the aftermath of Sandy. The utility lost one of its own in the storm. In tribute, it created a commemorative book titled Unprecedented.

That striking visual memoir is the winner of Ragan’s 2013 Employee Communications Award for Best Publication Design.

In the words of the creative team behind the effort:

Because of the wealth of strong imagery, much of it from National Grid employees, the project was always going to be image-led. Storms lend themselves to spectacular photography, so the challenge in image selection was to avoid glamorizing this tragedy; to find the balance between great images and the sobering stories behind them.

Those stories were culled from staff interviews, media accounts, and a wealth of other sources.

The resulting book is a fitting tribute to a fallen colleague and to all those who worked to overcome an array of obstacles and restore power to their customers. In all, some 16,000 copies were distributed to National Grid employees. Digital versions were made available, too.

Congratulations to the National Grid staff and their collaborators at 44 Communications on an outstanding achievement. 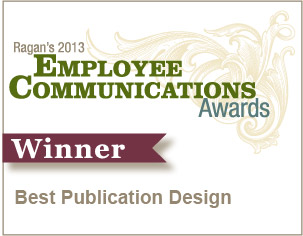