The best stories bring emotions out of people, and there are few things that make people as emotional as the animals they love. That may be why AT&T employees reacted so strongly to internal communicator and writer Jimmy Rice’s article on the intranet about colleague James Baker’s quest to save an adorable, 8-year-old dog named Arlo.

Arlo lost the use of his hind legs as a result of a degenerative disc disease and was scheduled to be euthanized. Baker stepped in and adopted him, giving him a set of wheels to help him move around. Now, Arlo is healthy and happy.

Baker did it because of his involvement in AT&T’s Do One Thing program, and Rice’s story about him and Arlo was intended to inspire employees to join him. The program is meant to get employees involved in community outreach and doing things to make the world better. Baker volunteered to help keep dogs from being euthanized. He’s helped more than 600.

Employees responded hugely, with 161 comments and more than 1,100 likes. The story’s emotional pull and the massive response it inspired make it the winner of Ragan’s 2013 Employee Communications Award for Best Short Article (Electronic).

Rice did a beautiful job of putting a human face on a corporate program, and people responded. That’s what the best writing does. 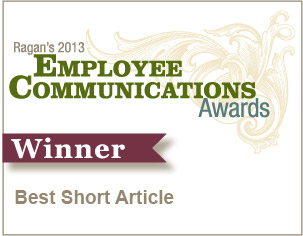