Winner: University of California Office of the President
SHARE

After four years of publishing the newsletter Link, the staff at the University of California’s Office of the President decided it was time for an update. A survey taken in early 2011 found that readers wanted simpler, easier navigation. Focus groups and reader feedback confirmed that, plus the staff wanted to bring the newsletter in line with the university’s new branding.

So when it came time to make changes to the Link website, which serves about 1,800 readers in the university community, usability was the main goal. Features such as comments, an event calendar, and bio submission forms got a more prominent place on the site, and the team built a new RSS feed for convenient reading.

The team and the contractor it hired to make the changes also made the design more amenable to video, made workshops and online classes easier to find, streamlined navigation, broadened the number of stories featured on the home page, built a “carousel” of featured stories, and improved search functionality.

Even with all those changes, the team aimed to make the redesign an evolution rather than a drastic overhaul. The color scheme and logo typeface remained.

When the new site launched in November 2013, readers offered a lot of positive feedback. The Office of the President’s hard work to find a happy medium has made Link the winner of the Most Improved Design (Electronic) category in Ragan’s 2013 Employee Communications Awards.

Open rates on the newsletter have increased 5 percentage points, from 42 percent to 47 percent, and the team has high hopes that it will increase even further in the months to come. 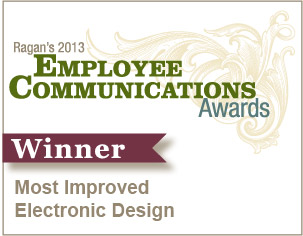