The world-famous Calgary Stampede was held in 2013, a 10-day experience that some thought might not happen after floods devastated southern Alberta in June, one of Canada’s worst-ever natural disasters. The Bow and Elbow Rivers, whose intersection is the site of Stampede Park, flowed at eight to 12 times their normal rates, leaving the park underwater a mere two weeks before the July event.

Telling the story of the effort to pull off the Stampede—with stakeholders galvanized under the “Hell or High Water” rallying cry—was the goal of the nonprofit organization’s first annual report. The report did contain numbers and information about sponsors and donors, but the stories of bringing the Stampede to life in 2013 were at its heart.

Stampede staff pulled together to find materials for the report, including videos, illustrations, photographs, and, of course, stories. Working with content agency Critical Mass, the Stampede team developed an interactive report that used fresh approaches to tell the stories of that historic year, approaches that resulted in a variety of awards.

For an innovative approach to recognizing the work of employees, volunteers, and the community—and for engaging employees in the process—Ragan’s 2014 Employee Communications Award for Best Annual Report (Electronic) goes to the Calgary Stampede. Congratulations to Sky England, Kathryn Konoff, and Kurt Kadatz; and, from Critical Mass, Andrew Zoller, Nicole Stark, and Mark Ashbaugh. 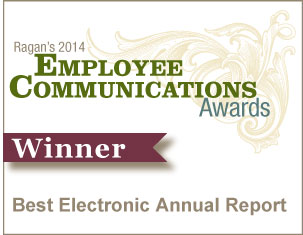