If you had to pick THE emblem of the Age of Sustainability and Renewable Energy, chances are the first machine to come to mind would be the astonishingly beautiful windmill.

These machines look delicate, almost small against the hulking hills and endless prairies they inhabit. Yet they dwarf the humans who built them.

Jodi Baker, media specialist at OPPD, skillfully evoked these ideas and emotions in OPPD’s two-minute video celebration of the dedication of its 118-turbine windfarm in northeastern Nebraska on June 25, 2014.

In this video, Baker establishes OPPD’s indisputable credentials as a rising force in the national renewable energy movement. For these deeds, OPPD is the co-winner of the prize for Best News Story Video in Ragan’s 2014 Employee Communications Awards.

The video opens with a shot of the vast eastern Nebraska prairie, blanketed by endless green carpets of growing corn, a reminder that the incredible fertility of America’s Heartland will someday soon depend on renewable energy.

Baker swiftly and seamlessly connects the 118 turbines to the village of Elgin, Neb., and to Nebraska’s economy. Andrew Roger, the editor and graphic artist, has created a compelling, simple graphic that locates two new Nebraska windfarms that will increase OPPD’s output of wind power to 30 percent of its total energy production in the next few years, putting OPPD among the national leaders.

Baker takes the viewer inside the cavernous tube of one windmill. Looking up the tube to the hub of the turbine’s arms looming far overhead, the predominant thought is, “This machine can’t be this huge!”

The video was shown to OPPD’s top 300 customers at a special meeting in October of 2014. Baker says that it “generated many positive comments from key account stakeholders [about] how we honor our commitment to environmentally-sensitive, affordable energy.” And the unpublicized video has gotten a respectable number of views on YouTube.

Congratulations to Baker and Roger for shooting a compact, fascinating glimpse of this little-known meeting place of natural forces and the needs of an advanced civilization. 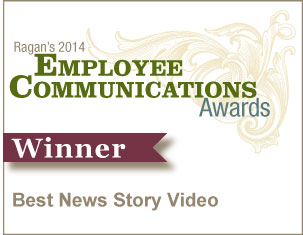