Employee safety is a top priority at Ferguson, the largest distributor of plumbing supplies (pipe, valves, and fittings) in the United States. But safety training is not always the most exciting topic at many organizations, so the team came up with an ingenious idea –  a feature on their intranet titled “What’s Wrong With This Picture?” (WWWTP). For the wit, variety, and ingenuity of their WWWTP intranet series, Ferguson has won the “Best Article Series (Electronic)” category of Ragan’s 2015 Employee Communication Awards.

The direct results and indirect benefits of WWWTP are impressive:

Congratulations to Courtney Anderson, APR, Emma Julian, Tyra Vaughn, and Katie Wickizer of the Ferguson communications team for their imagination, humor, and superior editorial judgment in this series! 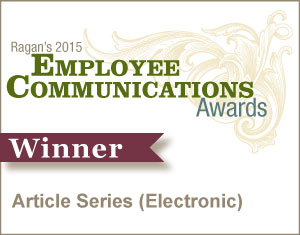