Bacardi’s sustainability program stands out because of the extraordinary lengths the organization takes to involve its employees in every part of its green push. Bacardi could have rested on its socially responsible laurels. It chose instead to make an all-out drive for sustainability. For its stubborn unwillingness to luxuriate in the status quo, Bacardi won the “Best Corporate Social Responsibility Program” category of Ragan’s 2015 Employee Communications Awards.

Bacardi took two years preparing its sustainability campaign, “Good Spirited: Building a Sustainable Future.” It recruited 50 internal “Green Champions” to get green campaigns going in Bacardi local facilities and business units all around the world. Its “Good Spirited Hub” took over a lot of territory on Bacardi’s intranet. Bacardi also: 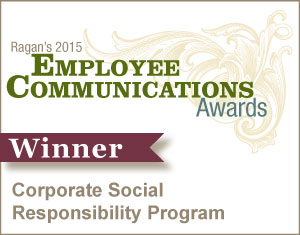