In February of 2015, Intermedix brought a new CEO on board for the first time in its 13-year history. As Joel Portice took the helm, Intermedix communicators saw an opportunity to foster stronger bonds between disengaged employees around the world and the organization’s leadership team. They repaired relations so well that Intermedix has won the “Best Executive Communications” category of Ragan’s 2015 Employee Communications Awards.

Here’s how bad things had gotten: The previous CEO’s approval rating in February 2015 was 45.7 percent. An employee satisfaction survey done at the same time revealed that less than half of employees approved of Intermedix’s executive communications.

Something new had to be done. Intermedix communicators resolved to: 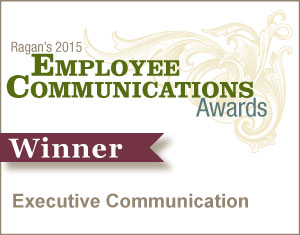