HAP won with a two-part article, “Two BFAWs are better than one,” and “Best friend at work: the enduring friendship,” inspired by research from Gallup proving conclusively that having a best friend at work correlated well with high engagement. Erin Johnson, internal communications coordinator, sent an appeal out on the weekly employee e-newsletter “HAPpenings,” asking, “Do you have a best friend here at HAP? Would you be willing to be interviewed?”

This appeal was linked to an infographic showing that 70 percent of workers thought that having friends in the workplace was important to a happy work life. After only one request, Johnson had enough volunteers to be interviewed. Johnson interviewed them live with their best friends.

The first part of the interview feature was posted on “oneHAP,” the company intranet, in May 2015, and then on HAP’s Facebook site. It became one of the Health Alliance Plan’s most-liked nonpaid posts for the month. The article was read by 314 persons and generated 33 comments.

Congratulations to Erin Johnson and her staff in internal communications at the Health Alliance Plan! 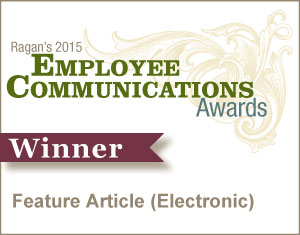