Some interviews are naturally more dramatic than others. But when an organization finds an employee whose story demands to be told, the drama is easy to find. That’s what won AT&T first place in the “Intranet Interview” category of Ragan’s 2015 Employee Communications Awards.

The subject of the interview, Mohamed Sati, was forced to join the Sudanese Army Militia at age 17. Before he could be absorbed into the nightmare of Sudan’s civil war, though, his family helped him escape to the U.S. where he lived with relatives.

He was one of the few whose lottery numbers came up for a visa, but bureaucracy kept him from getting the visa. He entered again and won again, and this time was granted the visa. He joined AT&T and has become a productive and valued employee.

The article is expertly crafted, as is the nearly three-minute companion video, which weaves images of war-torn Sudan, Sati’s family, his first U.S. home, and other images into the first-person account of his journey.

The telling of the story both in narrative and video format is one reason this interview rose above its competition. Another is the impact it had, with participants in AT&T’s employee advocacy program sharing the story 349 times, reaching 163,000 people.

Internally, the interview touched many employees, while making them feel good about AT&T for employing Sati. 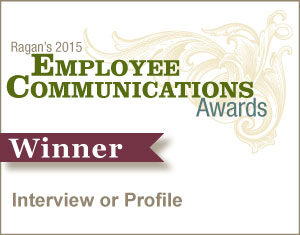