The accents vary. The backgrounds are different. The equipment used to record one video is different from another. What all the videos share in common is the passion of employees working for Cargill and the concluding statement, “My name is _________. I work in ___________. And I am helping the world thrive.” The video series is the recipient of a first-place awards in the “Marketing Video” category of Ragan’s 2015 Employee Communications Awards.

These “selfie” videos were one of two components of an internal video campaign tied to Cargill’s 150th anniversary. Employees were asked to submit the videos. To spark participation, local Anniversary Coordinators launched contests and other enticements. Ultimately, 119 “selfie” videos were contributed by employees.

The other component was a series titled “In Their Own Words.” For these, professional videographers travelled around the world to Cargill facilities, capturing 12 employee stories about how employees contributed to solving a stakeholder need.

The videos covered a farmer education program in Punjab, India; Cargill-built school kitchens in Honduras; Cargill’s role in helping a candymaker in Guatemala expand her business; and more. In addition to helping employees embrace the brand promise—“Helping the world thrive”—the videos were also offered externally on the company’s 150th anniversary website. 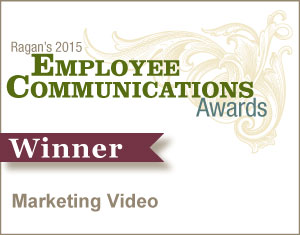