As IBM undergoes a transition from a hardware and software services organization to a cognitive solutions and cloud platform organization, it has invested heavily in its Think Academy, an open online course designed to educate IBMers on various lines of business based on the belief to make them better advocates for its products and services. When Think Academy became the home of an introduction to Cognitive, IBM needed a way to get its workforce engaged in its strategy. The result has won IBM first place in the “Advocacy” category of Ragan’s 2016 Employee Communications Awards.

The idea was for employees to form agile teams and describe a low-fidelity prototype. Then using internal crowdfunding resources, each employee received $2,000 in “ifundIT dollars” to fund the best prototypes. The top 50 teams advanced to the Outthink Challenge in Austin, TX, where 100 IBMers from around the globe pitched their prototypes to IBM leaders and clients; smaller events were held in 22 other global locations.

IBM has close to 400,000 employees, and an amazing 72 percent participated, with many of the projects undergoing additional development as they were adopted by the organization. More than 8,000 teams were formed, testifying to the effectiveness of communication that involved hyper-targeted, personalized email, site posters and guerrilla marketing tactics, in-person experiences, executive endorsements, blog posts, banners, videos, news stories, and a variety of other tactics.

Congratulations to the team of Nancy Pearson, Rebecca Reyes, Heidi Litner and Ann Rubin for a campaign that was a model of employee engagement and one of the most innovative employee-focused concepts seen in a long time. 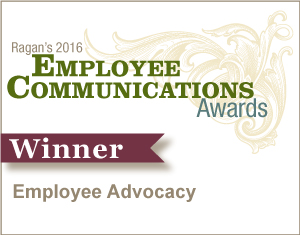