The communications team was tasked with educating employees in a way that established a consistent and compelling voice for internal communications and humanized the organization’s leadership. Rather than take a traditional approach, the team opted to emulate the extraordinarily popular Corden and Seinfeld series with one of their own, titled “Executives in an Elevator.”

Working with a local improv comic who portrayed a pizza deliveryman encountering various Molina executives while making deliveries in the building, the team produced biweekly videos that addressed a variety of issues and introduced staff to sides of their executives they had never seen before. Exercising even more creativity, they even created a blooper real.

The first episode attracted 6,500 unique views and 169 comments; seven of the eight videos (including a teaser and the blooper reel) garnered five-star ratings. Cumulatively, the videos were viewed 31,765 times and attracted 668 comments. The production was so successful that Molina’s communicators are already at work on season two of “Executives in an Elevator.” 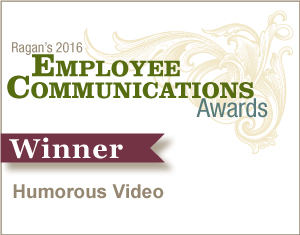