Most of ARUP Laboratories’ employees don’t sit at computers where they can peruse content on an intranet. A print magazine turned out to be the best way to reach those employees, and the resulting publication has taken first place in the “Print Magazine” category of Ragan’s 2016 Employee Communications Awards.

Employees at ARUP, a medical laboratory testing organization, know their jobs well, but communicators wanted to ensure they understood and supported the vital role the organization plays in patient diagnosis and treatment. Between 70 and 80 percent of healthcare decisions are made based on the results of the kinds of tests ARUP’s employees conduct every day.

The print magazine, Magnify, allows employees to see the number of successes and innovations emerging from the various individual labs within ARUP. The magazine humanizes the organization as well, talking not just about the medical technology it employs but the people behind the science.

Magnify also makes complex science accessible for employees who don’t work in scientific roles. In addition to serving as an internal communication vehicle, Magnify has also become a tool for the organization’s sales team.

The execution of the publication is a clear match to the goals: It is filled with human stories and organizational achievements in a clean, engaging package with modern design.

Internal feedback found that 87 percent of employees see Magnify as highly valuable. Other metrics also demonstrate that the publication is achieving its goals. 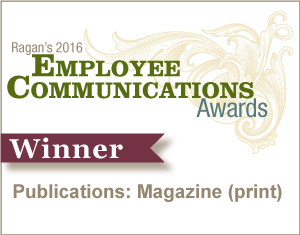