When eight health care organizations combined to create Envolve, communicators were tasked with reaching 1,500 multishift employees in 60 locations, along with 1,000 telecommuters. The success of their effort has earned them first place in the “Rebranding Campaign” category of Ragan’s 2016 Employee Communications Awards. The level of dispersion among employees who had previously identified with a smaller employer led to a strategy that was grounded in two teleconference meetings (to make sure staff on all shifts could participate) led by the CEO. An impressive 89 percent of the multishift employees participated. The teleconferences were followed with Q&A sessions at local facilities, aided by employee FAQs and manager kits that included talking points.  The teleconference, which featured a brand message video, kicked off a weeklong celebration designed to convey the new “Better Together” theme. Daily activities engaged employees through themes. Fitness and Technology was Monday’s theme, for example, with employees winning Fitbits for registering on the new intranet.  Communicators also employed brand ambassadors from among the employee population to distribute posters and promotional items. The week after the rollout, a “Better Together” quiz engaged employees further, drawing participation from more than half of the total staff. Nearly 30 percent of the staff contributed photos for a selfie contest and almost 70 percent cast votes for the best selfies.  Congratulations to the communicators at Envolve! 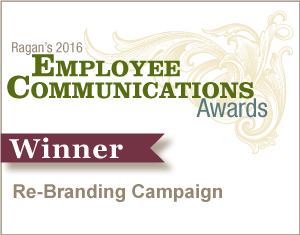