What did you want to be when you were a kid? Chances are you can answer that question pretty quickly. Asking Rockwell Collins employees that question produced answers that communicators were able to link back to the jobs they do now. The videos that resulted have won Rockwell Collins first place in the “Recruiting Video” category of Ragan’s 2016 Employee Communications Awards.

Twelve of the videos were produced in multiple versions, including a 15-second video and a 90-second video. Behind-the-scenes photos of the employees in their youth accompanied the videos in a phased approach on a broad range of social media channels, including Instagram, Twitter, YouTube, LinkedIn, and Google+.

The #IWantToBeRC hashtag was also included in the ads, marketing materials and emails. The videos grew in popularity as new ones were released, with the audience growing from 248 for the first one to 18,119 for the most recent. The videos helped spark an 87 percent increase in the number of followers of Rockwell Collins’ social media channels, and traffic to the organization’s careers site grew 37 percent since the program was launched. Individual videos have been views as much as 20,000 times.

The series’ popularity has led to the hashtag appearing on T-shirts, billboards and other collateral used as part of the company’s recruiting efforts. Employees also latched onto the videos, and senior leaders incorporated them into internal presentations. 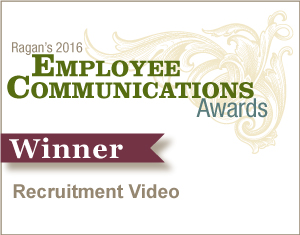