CBRE is, by any measure, a huge organization: More than 75,000 employees work 450+ offices in more than 100 countries, as well as in client and field locations. It’s easy for employees to see those other locations as an amorphous mass. To alter that perception and build a sense of community and shared culture, the internal communications team launched an article series. It was so successful that it’s won first place in the “Article Series” category of Ragan’s 2017 Employee Communications Awards.

The idea for a series profiling frontline employees started in a staff meeting when one employee shared a fun fact about someone she worked with. The team visualized the series as a virtual water cooler for employees, a place where they could learn and engage in conversation about one another’s “careers, charities, hobbies, passions and talents.”

Behind these engaging profiles was a rigorous process that began with nominations from the organization’s Employee Communications Advisory Board and regional intranet authors. Once a name was submitted, it was vetted with HR to ensure the nominee was an employee in good standing, after which the team reached out to the employee’s manager to approve the interview.

An introductory email kicked off each interview, followed by a phone conversation that helped the writer capture the employee’s voice. At least five profiles have been published, including one about the organization’s longest-tenured employee (57 years) and another about an employee who is also a Grammy-nominated musician.

The articles themselves are well written and capture the personalities and unique characteristics of each subject. Published under the banner of “75,000+ Stories,” the articles are popular with employees. One of them ranks as the top-viewed intranet article of 2017. 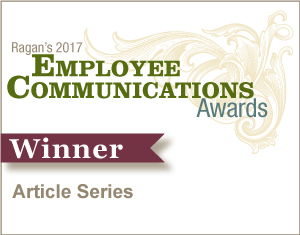