If you have ever traveled through an international airport, there’s a good chance you’ve at least seen, if not interacted with, members of Travelex. They sit in booths (known internally as “bureaus”) exchanging currency from one country to another for people traveling across borders. There are often only one or two people in a bureau for eight hours a day, meaning there is little interaction among staff and little opportunity for building community and connection. Travelex accepted the challenge by using its intranet, The Lounge, to address the issue, and in so doing has won first place in the “Social Intranet” category of Ragan’s 2017 Employee Communications Awards.

Blogging is at the heart of The Lounge, with every employee able to post pretty much whatever he or she wants. “It’s amazing the contribution we have had as they vary from Exec monthly updates, to colleagues in the bureaus sharing every aspect of their lives,” Travelex says. One employee named Amber shared multiple posts about how the business helped her “put her life back together again.”

These posts were among the most popular, with more than 400 likes and 250 individual commenters. Amber isn’t alone in posting, though. The blog attracts an average of 11 posts daily from employees worldwide; its popularity is aided by a “Blog of the Week” feature on the intranet’s home page.

Executives also share information via the blog, including the CEO, who contributes a monthly video and comments on posts employees write, demonstrating he is part of the community and not above engaging directly with the front lines.

Congratulations to Travelex’s Tricia Scott and Interact for a noteworthy achievement. 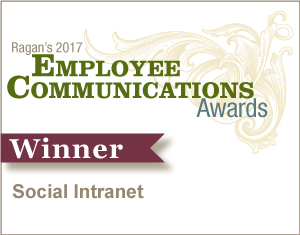