Navistar, a commercial vehicle and engine manufacturer that had not been profitable for a full year since 2011, had a lofty goal for its employee communications campaign: Return the company to profitability. Navistar’s success has earned the Grand Prize in the “Employee Communication Campaign of the Year” category of Ragan’s 2018 Employee Communications Awards.

The corporate communications team worked with company’s leadership to “inspire employee action and engagement focused on this critical business goal.” The specific measurable communications objective was to continue the improvement in employee attitudes that the company had achieved over the previous several years. These included employees’ understanding of the company’s strategy and their role in executing on it, their trust and confidence in leadership and their belief that Navistar’s leaders had communicated a motivating vision of the future.

The strategy the team developed had to overcome years of cost-cutting, plant closures, layoffs and inconsistent incentive payouts. The concept they developed was labeled “Celebrate”—one of Navistar’s six core values. The theme found its way into video events, a third-quarter celebration, monthly updates (which included a graphic dashboard showing the expected incentive payout based on progress toward achieving key operational goals), open forums with executives, manager talking points and a host of other tactics.

What better metric for success can you imagine than achieving full-year profitability? The company earned its single largest-year market share gain in nearly a decade, along with a host of other achievements attributed, in part, to the communication effort.

Research also found employees’ understanding of the strategy, confidence and trust in leaders and their belief that their leaders had communicated a motivating vision of the future had all reached or exceeded a goal of 4.0 on a 5-point scale. The fact that all this was accomplished on a shoestring budget was just icing on the cake. 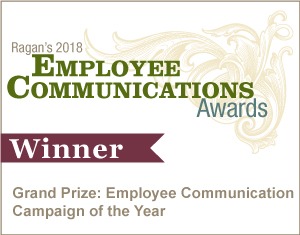