Hospitals and health care organizations typically run an annual hand-washing campaign designed to remind employees of the importance of washing their hands regularly and thoroughly. The communicators at Bon Secours Health System went outside the ordinary, winning first place in the “Humorous Video” category of Ragan’s 2018 Employee Communications Awards.

To capture employees’ attention, the team produced a video game show called “What’s On Your Hands?” Designed to support the annual clean hands campaign, the video features a patient surprised to find himself a contestant answering questions from a game show host about the germs and bacteria that could be on his hands after touching various objects commonly found in a hospital.

The video premiered in employee newsletters distributed during the campaign and was posted on the intranet and through Bon Secours’ social media channels; staff members were also encouraged to share it in team meetings.

The goals were easily met: reinforcing the importance of hand hygiene, supporting the campaign and reducing hospital-acquired infections, and engaging staff members through humor (one employee commented, “This cracks me up!”). 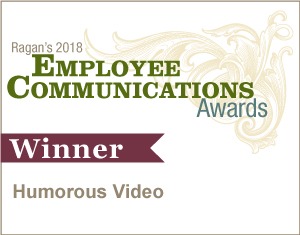