City of Hope produces a biweekly internal online newsletter, Inside Hope, conceived as a way to connect staff members with the organization’s priorities and one another while deepening employee understanding of the hospital’s goals and vision. Employee profiles are a part of the newsletter’s content mix, and one of them has won first place in the “Interview/Profile” category of Ragan’s 2018 Employee Communications Awards.

The story was written to reinforce City of Hope’s leadership in equality and inclusion for its LGBTQ staff. Eli Mendelson had come out to employees as transgender in a video explaining his decision to undergo medical transition and asking colleagues to adopt his new name. He also founded Pride in the City, the diversity resource group he continues to lead, designed to provide a safe and supportive space for LGBTQ employees. As a result of Eli’s leadership, City of Hope was designated a “Leader in LGBTQ Equality” by the Human Rights Campaign in both 2017 and 2018.

In telling Eli’s story through the lens of his role as an employee in the organization’s Philanthropy group, communicators were able to explore the roles played by the HR staff, the benefits staff, Eli’s boss and other members of the City of Hope employee population. According to City of Hope, “Telling Eli’s story in his time, in his way, allowed us to profile a courageous person, a dedicated and talented worker, and also provide a platform for him to advocate for himself and others like him at City of Hope.” The profile also gave others at the City of Hope assurance that the organization’s culture is one of acceptance and inclusion. 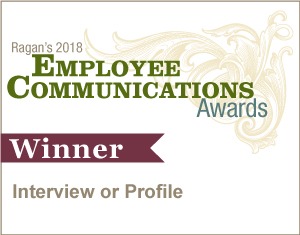