They say the Golden Rule is to treat others the way you’d like to be treated, and if you ask a particular “Golden Girl,” that same rule also applies to your Golden Retriever.

In fact, Betty White would most likely assert it applies to all animals.

No wonder it was such a natural partnership for the Morris Animal Foundation to team up with the acclaimed actress, comedian, and avid pet activist for a milestone birthday celebration.

The nonprofit organization—for which Betty serves as a trustee—initially launched the “Betty’s Birthday Wish” campaign in 2012 in honor of her 90th birthday, successfully raising $14,288 from 104 donors.

Due to the effort’s great support, Morris decided to try it all again for the star’s 91st second annual 90th birthday.

This time around, though, Morris knew it would have to get slightly more creative, seeing as how the idea of turning 91 isn’t quite as engaging as it is turning 90.

For help, the foundation turned to Causes.com. There, it set up a page dedicated to the campaign to assist in the development of its promotional messaging in accordance with best practices relative to its platform on social media, as well as its general media outreach.

Along with emailing out a personal “Birthday Wish” letter from Betty just prior to her actual birthday (Jan. 17), Morris also established the hashtag #happybirthdaybetty to pick up greater traffic from Twitter.

And greater traffic it got.

With all of the extra work, the organization managed to out-raise itself, bringing in $14,602 from more than 350 donors, 250+ of whom were entirely new supporters of the foundation.

It also managed to bring in one last gift for Betty and the foundation: our prize in PR Daily’s 2013 Nonprofit PR Awards for Best Digital PR and Marketing Campaign. 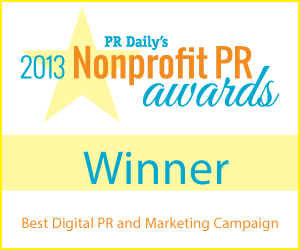