Plus, in a $30 billion industry that the uninitiated may consider a male-only domain (think: guys and cars), SEMA wanted to highlight the parts and services member companies produce through an all-female creation of a vehicle.

So it got Ford Motor Co. to donate a Mustang, partnered with a major media company, and set a volunteer team of women to work to beef up the iconic car. The “SEMA Mustang Build Powered by Women” was a huge success on a PR/media budget of less than $1,000.

This is why SEMA has won the prize for Best PR on a Shoestring Budget in PR Daily’s 2013 Nonprofit PR Awards.

With the help of manufacturer donations and a major media company, SEMA’s team created not only the car but YouTube videos of the work the women did. That, along with sharing on Facebook, Twitter, LinkedIn, and online and print media, maximized exposure by building a community of advocates.

SEMA accumulated more than $60,000 worth of donated products for the project, secured donated PR services, gathered an all-female team of more than 50 volunteers, and partnered with groups as diverse as eBay and Facebook.

Along the way it won coverage on “CBS Evening News,” drew 85,000 views on Motor Trend’s YouTube channel alone (with tens of thousands more on Ford and other sites), and won 65,000 Facebook likes. 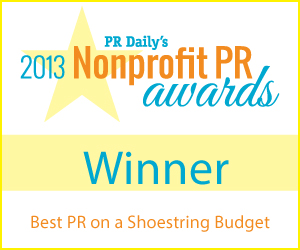