Actors are skilled at creating expressions of shock, horror, and fear, so a public service video of Hollywood stars and celebrities like Emily Blunt, Tom Felton, and South African pop star Yvonne Chaka Chaka expressing their revulsion at some disturbing images might provoke skepticism. Is it real? Or are they just acting?

But any viewer who sticks it out to the end of the video produced by Sabin Vaccine Institute will understand that those celebrities’ reactions weren’t faked—and why this video won first place in the Best Public Service Announcement category of PR Daily’s 2013 Nonprofit PR Awards.

Sabin needed to raise awareness about diseases like schistosomiasis, onchocerciasis, lymphatic filariasis, and others—Neglected Tropical Diseases (NTDs) that infect 1 in 6 people worldwide, including more than 500 million children. To break through the information glut and reach the general public, Sabin launched the END7 campaign.

For its PSA, “How to Shock a Celebrity,” Sabin enlisted a handful of celebrities to simply watch a video showing the impact of some of these diseases on children. They included Blunt, Felton, and Chaka, along with actor Eddie Redmayne (Marius in “Les Misérables”), actor Tom Hollander (King George III in HBO’s “John Adams” and Cutler Beckett in two “Pirates of the Caribbean” movies), and Bollywood actress Priyanka Chopra (also an international recording artist).

Watch the video if you dare. Some of these stars couldn’t: They cringe, look away from the images, weep, and in some cases walk away. But the U.K. and U.S. version of the video, available on YouTube, received more than 400,000 hits in its first month and was one of the top 10 most watched YouTube videos for several days. Seventy-five percent watched most of the two-minute clip (which is more than one Ragan judge can say).

And the financial support has been overwhelming: Donations have averaged 20 cents per view, a tremendous rate in a medium that is not known for winning over new contributors on the first try (55 percent of contributors are new to the cause).

For sheer power, “How to Shock a Celebrity” is a definite award-winner that will keep you up at night.

Here’s the video. Warning: You’ll feel shocked watching it even if you’re not a celebrity. 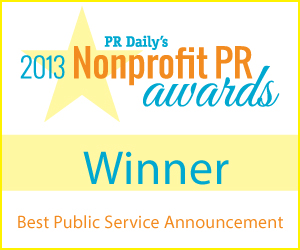