Winner: PadillaCRT for Children's Hospital of Richmond at VCU
SHARE

Children’s Hospital of Richmond found itself needing to remind the community of its capabilities and its record as a community advocacy group formed to lobby for construction of a new children’s hospital, so they reached out to their agency, PadillaCRT. The hospital’s overall campaign employed a variety of channels, from a hashtag campaign to a video that drew more than 100,000 views. The campaign also excelled in its media relations endeavors, earning it the prize for Best Media Relations Campaign in PR Daily’s 2014 Nonprofit PR Awards.

The Christmas-themed effort drew media attention, and a coordinated outreach effort ensured the press was aware of it. Given that Richmond is not a top-tier media market, expectations that the campaign would be covered in 10 local media outlets were reasonable, if not ambitious. But the story was reported in 58 outlets, and the video was featured by some A-list media organizations, including The Huffington Post, Parents.com, and “Access Hollywood.” Another sports-related component of the campaign attracted coverage from an entirely different spectrum of the media, amplifying the message to a broader audience.

We have a pat on the back for Chhayal Mehta, Shira Pollard, Rachael Seda, April Sciacchitano, Kelsey Mohrning, and Liz Rea. 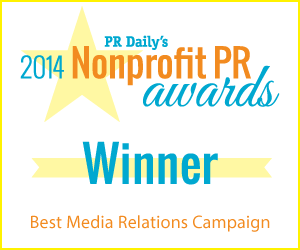