Annual reports can be real snoozers, a dry accounting of funds received, those spent, and how they were allocated. But not this one. Perkins’ 2013 annual report movingly demonstrates the group’s commitment to building productive and meaningful lives for the nearly 1 million people it serves.

The report’s opening photograph shows a young blind girl reaching her hand high to touch continents on a raised-relief map of the world. The image drives home the point that people who are blind, deaf/blind, or visually impaired with other disabilities may still partake in a world of opportunities. Perkins is helping them do so via its five divisions: School for the Blind, International, Library, eLearning, and Products.

Current and potential donors are always on the lookout for a nonprofit’s tangible measures of success, and Perkins’ report delivers on that score, as well. The communications team scattered statistics in large type throughout the first half of the report to provide snapshots on, for example, the number of babies receiving early intervention services, the number of professionals receiving education through Perkins’ Training Center, and the number of library patrons using braille and audio books. The report also highlights the completion of Perkins’ first-ever capital campaign, a seven-year project that exceeded by $6 million its goal of raising $130 million.

Perkins takes home the prize for Best Report in PR Daily’s 2014 Nonprofit PR Awards because it not only provides the necessary financial information crucial to a nonprofit’s annual report but also shows the organization’s positive impact on people’s lives through the use of poignant photographs. Issued in braille, audio, electronic, and paper formats, the document serves as an outstanding marketing tool that encapsulates Perkins’ mission.

Kudos to Perkins Communications, whose members were responsible for the success of this report. 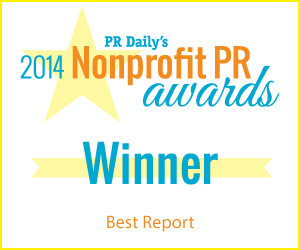