Most campaigns to promote a geographic area as a place to live and work are mind-numbingly similar. South Sound Together and its agency partner, JayRay, opted to shake off the tired old approaches in order to convey the message that Pierce County, Washington, in the south Puget Sound area, is a great place for families and businesses. Its success has earned it first place in the “Corporate-Nonprofit Partnership” Category of PR Daily’s 2017 Nonprofit PR Awards.

The goals were loftier than simply standing out and getting noticed. The theme had to resonate with local businesses and South Sound Together partners, which spanned organizations from government agencies to nonprofits to businesses, in order to inspire their participation while complementing other South Sound Together initiatives.

The challenges were many, including working with a coalition of more than 30 partners and ensuring the campaign brand worked well with existing brands from local businesses and other organizations.

The South Sound Together campaign identity was brilliant: a stylized image of Mt. Rainier and the tagline, “Live Like the Mountain is Out,” referring to days the mountain was visible without overcast skies to obscure it. The identity made its first appearance as a stealth campaign with chalk art and other instances suddenly appearing in the area.

The guerilla tactics gave way to a teaser campaign with coffee sleeves and coasters, a roaming truck billboard, digital and newspaper ads and more. Finally partners began displaying the image, which also found its way into social media channels and local media, all aided by a comprehensive style guide.

More than 50 Pierce County organizations have adopted the identity in their own marketing materials. Uptake on social media has been impressive, too; for example, the campaign’s Snapchat filter was used 145,000 times in the first 24 hours it was available.

For a campaign that brought the community together, used multiple channels effectively and created broad awareness of the region, congratulations to Kacie Leacy, Jay Hember and Kathleen Deakins. 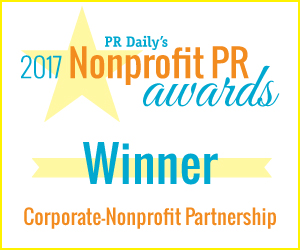