The Found Animals Foundation has a simple goal: Keep pets in homes. Among the Foundation’s sources of revenues is its Adopt & Shop pet stores. Its agency, All Boats Rise, is tasked with raising awareness about the organization and its shops, and figured there had to be a way to tap into the cultural zeitgeist that was the 2016 U.S. presidential election. Its campaign, “Kitty Election,” featured two litter boxes, and it’s won first place in the “Social Media” category of PR Daily’s 2017 Nonprofit PR Awards.

The bar was low. “If we got 100 new followers on Facebook, it would be a success,” the Foundation says. “New followers would expand Found Animals’ access to potential adopters or volunteers.”

The group broadcast a continuous Facebook Live feed of two litter boxes in the Foundation’s kitten room, one adorned with a tally card bearing Donald Trump’s image, the other featuring Hillary Clinton. Viewers could see which litter box the cats chose.

Along with some patriotic decorations, that was all it took to attract 6 million views in just two and a half hours (more than livestreams from New York Magazine and the Huffington Post), along with nearly half a million engagements (shares, likes and comments).

As for that goal of 100 new followers? The livestream attracted 6,000. 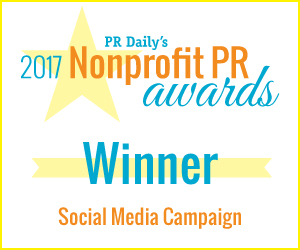