The New England Center for Children (NECC) wanted to get media attention to a well-covered topic area: autism. Because the number of children diagnosed as autistic continues to increase, media interest has grown as well. Penetrating the list of institutions already driving coverage would be a significant challenge for an education and research center serving those on the most severe end of the autism spectrum. In meeting that challenge, the New England Center for Children has won first place in the “Media Relations Campaign” of PR Daily’s 2018 Nonprofit PR Awards.

With a goal of raising the NECC’s profile and increasing donations, upfront research was essential. That research revealed two key types of effective pitches, those that told poignant stories and those that addressed research. It also pointed the NECC team to the two most influential media outlets for their message: The Boston Globe and The New York Times.

With specific reporters targeted, the team put its strategy to work, grinding away with regular press releases and securing coverage in other outlets to pique the interest of the targeted reporters. NECC leveraged a Board contact with a Globe reporter to write a small story, which in turn led to the cultivation of another reporter that resulted in a large front page story. A prominent article in the Times also paid off, resulting in even more coverage from other outlets.

The detailed, grind-it-out strategy achieved one of its key goals: Fundraising grew (including an unexpected $20,000 donation that cited the Globe story as the inspiration for the contribution). Media coverage overall increased 340 percent.

Congratulations to the team of Michele Hart and Shawn Whalen. 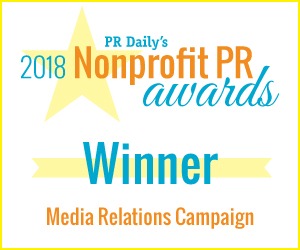