You can feel pretty homesick when your hometown sports team makes its way through the playoffs while you’re living in another city far away. For Visit Philly, Philadelphia’s travel and tourism organization, knowing there were loyal Eagles fans living out of town during the team’s run-up to the Super Bowl was the springboard for a social media campaign that delivered big returns based entirely on user-generated content. It’s taken first place in the “Social Media Campaign” category of PR Daily’s 2018 Nonprofit PR Awards.

The campaign began with the organization asking via social media what Eagles fans would need to have the ultimate Super Bowl party. More than 650 comments were shared, leading the social media team to identify 20 native Philadelphians far from home to surprise with packages containing items people had suggested, such as cheesesteaks—of course—Wawa iced tea, Tastykakes and Eagles gear.

In return for getting the packages, Visit Philly asked that they record their unboxing moments and send back the footage, which the organization shared across its owned platforms. The video of people unboxing their goodie boxes reached 242,140 unique viewers and generated 4,450 likes, comments, shares and retweets. The video has been viewed more than 179,000 times (for a total of 45 days’ worth of video views) on Facebook alone—without paying to boost it. 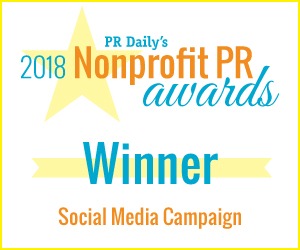