The Change Foundation packs a big punch with its video, “Abbigail’s Story,” which introduces viewers to a population most don’t know exists: young people who spend a significant part of their lives as caregivers while their peers spend their time outside of school playing, studying and just being a young person. It’s won first place in the “Video” category of PR Daily’s 2018 Nonprofit PR Awards.

Because both her parents work, Abbigail is a caregiver for her twin brother, who has Tourette’s and a mood disorder. The day-in-the-life video hammers home the challenges Abbigail and people like her face, from the triumphs to the tribulations.

The video’s goal was to heighten awareness of the need for services and programs to support young caregivers. One reason the video is so compelling is that the Change Foundation turned the writing over to Abbigail. Working with Change Foundation staff members on the editing of the script, Abbigail was able to, according to the Change Foundation, “convey her struggles at school with friends, frustration with the health care system, (and) how she found support and ultimately put out her call to action: better recognition and support for young carers in Ontario.”

The video was used to introduce a conference, but its influence has spread far beyond that, ultimately attracting more than 42,000 views, more than any other Change Foundation video. It also led a spike in subscribers to the Foundation’s YouTube channel and media interviews with Abbigail.

Congratulations to the Change Foundation’s Catherine Monk-Saigal and Christa Haanstra. 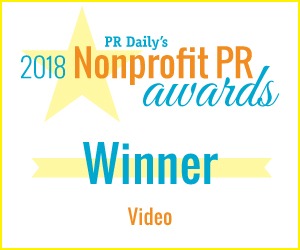