Stein IAS, a B2B marketing company based in the U.K., undertakes an annual Christmas charity project. In 2018, it was the New York City office’s turn to spearhead the project. Its focus was New York City’s homeless, too many of whom are children.

The company identified an ideal recipient for the funds the project raised: Women in Need, which supports homeless families, helping them into permanent homes while also providing short-term shelter. The approach Stein IAS took has won first place in the “Community-Nonprofit Partnership” category of PR Daily’s Nonprofit PR Awards.

To convince the rest of the company to adopt the charity, the team spent time volunteering at a WIN shelter and produced a video to share with the rest of the organization. The team innovated the idea of a children’s book in which Santa receives a letter from a homeless girl that sends him on a journey to find and help her.

With the book written and designed, the team produced a three-minute video version; it served as the centerpiece of a microsite, where visitors could also make a donation in exchange for a printed copy of the book. Employing its marketing know-how, the team initiated a media outreach campaign along with digital marketing and a social media effort.

The press releases Stein IAS distributed, along with calls to media partners, resulted in more than 100 individual pieces of coverage. The social media strategy employed a carefully planned algorithm that, combined with real-time responses, produced more than 400,000 impressions.

Ultimately, 1,754 donations were made and 600 books purchased. WIN received $27,000 from Stein IAS, while Stein’s employees absorbed new skills through the training the company provides during each of its holiday programs. (A creative director, for example, learned to write a children’s book.) 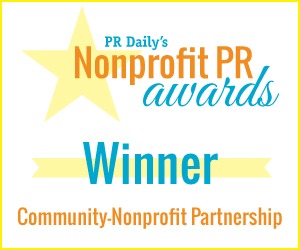