On the one hand, it’s not too hard to convince people to chow down on some tasty gelato. On the other, it can be a little tough to make one brand of the delicious treat stand out from the rest.

But that’s just what PR agency RF|Binder was able to do for the Talenti Gelato brand in November 2011, with what the agency calls a “disruptive” video. The video features people gathering in Prospect Park in Brooklyn to play some jaunty rhythms on Talenti containers of varying degrees of fullness and a few other things, such as a stroller.

With its infectious rhythms and short running time, the video snagged RF|Binder the 2012 PR Daily Award for Best Viral Campaign/Word of Mouth.

The agency’s team watched hours upon hours of brand videos to prepare to create a one-minute video for Talenti, whose personality the team tagged as being cheerful and sociable. Production took about a month and a half to complete, and the music in the video was all really created using the makeshift instruments.

Since going live in late November, the video has snagged more than 54,000 views. RF|Binder promoted it through the Talenti Facebook page and a handful of promoted tweets. 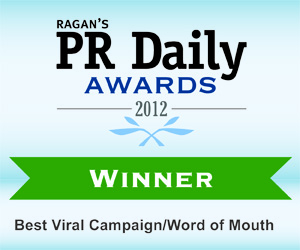