When PR pros get together, they sometimes trade war stories about communications crises they have had to deal with on the job.

But it’s hard to beat the crisis that Peak Communicators faced—or the deftness of its response—when a former employee of its client, the Canada West Veterinary Specialists in Vancouver, B.C., was arrested on charges of bestiality with his dog. And, er, police had video, too.

Peak Communicators wins top honors in the Best Crisis Management category of the 2013 PR Daily Awards not only for the way it distanced its client from an event that understandably horrified customers. Peak also managed to push a positive story that helped reverse the damage to the veterinary clinic’s brand.

The crisis began with the arrest of a 38-year-old proponent of legalizing bestiality. The suspect had listed the hospital as his employer on his publicly accessible Facebook page—even though he had been fired two years earlier because of his advocacy of bestiality.

The suspect had only sterilized surgical equipment, and never had access to animals while working at the hospital. Clients flooded the hospital with calls, outraged and concerned about their own dogs that had been treated at the clinic. The owners feared their pets might have come into contact with the accused.

Peak Communicators not only successfully distanced the hospital from the alleged criminal; it also found a good-news story to promote just after the crisis had passed. Burglars had shot and beaten a dog named Rumble who was protecting his owners during a home invasion, and the hospital agreed to donate medical services.

This drew nationwide stories in places like the Vancouver Sun and The Montreal Gazette, and citizens pitched in contributions to a fund for the “hero dog.”

The deft pivot from crisis to positive PR wins Peak this year’s award. 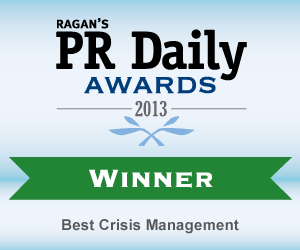