The Internet has made solving problems pretty easy.

If you don’t know how many ounces are in a quart, when to plant your garden, or how to change a tire, all you have to do is ask a search engine.

In 2012, Ask.com had its most successful year to date. To celebrate, as well as increase awareness of and traffic to the question-and-answer site, Ask.com hired Dotted Line Communications. The company then created the location-based “You Asked, We Answered” campaign.

The success of the campaign earned Dotted Line Communications first place in the Best Location-Based Campaign category of the 2013 PR Daily Awards.

To encourage more people to become regular Ask.com users, Dotted Line Communications wanted to connect the brand to users on an emotional level. The company decided to target users in the Seattle area because of the city’s tech savvy and low brand saturation, as compared to other cities.

To solve the problems Seattle citizens face, Ask.com first found out what they were through extensive research. It found that the issues that bother Seattleites most are the heavy morning commute, debilitating baseball stadium traffic, and budget cuts on favorite summer traditions and activities.

Ask.com then got to work solving the problems.

To ease the morning commute, Ask.com partnered with a local coffee roaster and staged pop-up coffee shops that distributed free coffee to more than 2,500 commuters.

To clear stadium traffic after a Seattle Mariners baseball game, Ask.com asked fans to leave their cars at home and gave more than 600 pedicab rides to 1,200 people.

To ensure there was enough money for Seattleites’ favorite summer activities to continue, Ask.com donated money to the Seattle Parks and Recreation department to keep three popular wading pools open throughout the season.

Overall the campaign achieved its goal, earning Ask.com 30 percent more traffic from Seattle-based users, and dropping the number of Seattle users who said they “don’t think to use Ask.com” by 6 percent.

Read more about the campaign here. 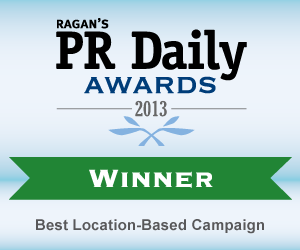