Here’s the short list of what BlackBerry (formerly Research In Motion) faced in June 2012:

The U.S. media could be excused for thinking this was the end.

After a restructuring and name change, BlackBerry’s corporate communications team set out to change the views of the public and the industry with good PR that featured a personal touch.

By January 2013, BlackBerry had orchestrated an astonishing turnaround:

For engineering this startling transformation of the company’s global reputation under the most difficult, discouraging circumstances imaginable, BlackBerry’s corporate communications department is the co-winner of the Best Traditional Campaign category in the 2013 PR Daily Awards.

What is particularly impressive is the deep, detailed change in global media sentiment about BlackBerry and its Z10 smartphone. The main media themes after January 2013 have been:

We congratulate Heidi Davidson, Adam Emery, and Meigan Terry for their extraordinary decision to personalize their corporate PR, and bolster online PR with traditional media and public relations in a decisive corporate crisis. This took real nerve. It was a calculated gamble that paid off hugely. 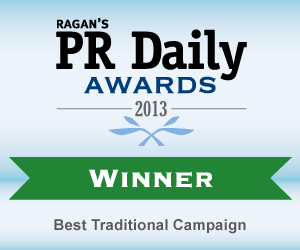