What do you do when your brand is not only at the center of both a national and worldwide epidemic—obesity—but also touted as one of its biggest contributors?

If you’re the head of the world’s largest beverage company, you make a highly publicized global commitment to fight said prevalent health spate even more public by posting about it on your corporate website.

That’s what The Coca-Cola Company and CEO Muhtar Kent recently did, a move only made possible by the launch of its new brand journalism website.

Debuted on Nov. 12, 2012, the company’s most ambitious digital project since the launch of its first website in 1995 culminated in “Coca-Cola Journey,” what its own team has called a quantum leap forward in the brand’s digital corporate communications.

The vision was for the site to become Coca-Cola’s digital hub—a place where visitors could explore its brands through rich, multimedia stories featuring original content, vibrant images and videos, extensive social sharing, dialogue, and debate.

Knowing the site needed to be designed to function as a visually compelling digital magazine, Coca-Cola partnered with two outside agencies, The Wonderfactory and Perfect Sense Digital. With their aid, the new site made this all possible while also reimagining the role of a corporate website.

The launch nabbed great acclaim and coverage from media outlets, including notable publications such as The New York Times, Advertising Age, Financial Times, Brand Channel, and even yours truly, PR Daily.

Yet despite the impressive coverage and a growing base of more than 1.2 million visitors each month, the real success of “Journey” comes from its very content.

Original content featured throughout the site follows general thematic areas, each of which the company is heavily invested in. These include sustainability, innovation, history, careers, food, health, jobs, and entertainment. It also offers the brand a place to house opinions, both from company executives as well as outside industry leaders.

“For our part, we commit to be an open, transparent, and honest host and thoughtful curator. We’re doing this because we’re optimistic about our world, and we think we have something to contribute to the global dialogue.”

This includes everything from discussion on the battle against obesity to utilizing the site to respond directly to news reports, controversy, and criticism.

It’s for this innovative take on corporate communications that we applaud Coca-Cola for its branded content. From one editorial team to another, it’s our privilege to name The Coca-Cola Company the 2013 PR Daily Awards winner for Best Website Launch. 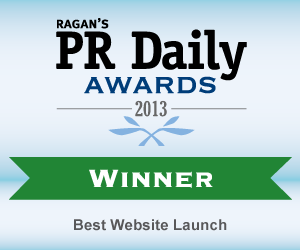