Of the 175 drug overdose deaths every day in the United States, most are directly related to opioids. Despite the epidemic’s spread in recent years, getting institutions and society to embrace a viable solution has been a challenge. CURA Strategies was founded as a bipartisan effort to focus on promoting a recovery treatment that works: Medication-Assisted Treatment (MAT). Its efforts have earned first place in the “Health Care Campaign” category of Ragan’s2017 PR Daily Awards.

Despite the evidence of its effectiveness, MAT is offered to less than 10 percent of people in treatment. To change that, CURA established four pillars for its efforts: educating policymakers and institutions about MAT’s effectiveness, ensuring access to treatment, removing barriers to insurance coverage and encouraging drug court programs to permit the use of MAT treatment.

CURA used social media to aim its efforts at New York and Washington, D.C. and support passage and funding of the Comprehensive Addiction and Recovery Act. Particularly smart was getting the attention of newly-elected President Trump and his administration with the hashtag #LetsTrumpAddiction that “appeals to Trump’s bravado and builds on his campaign promises,” according to CURA.

The nine-day blitz told the tale of a new patient, family or provider each day in order to humanize the crisis. Allies were offered a social media toolkit to help spread the word. Op-eds were published and other PR tactics employed, ultimately exceeding the goal of recruiting 1,500 supporters despite a challenging environment that was more focused on derailing Trump’s agenda than on addressing the opioid crisis and other important issues.

Engagement on social media was strong. Even presidential administration action started out well, with CURA’s agency contacted by White House speechwriters a few days before Trump was due to deliver a speech to a joint session of Congress in which he was expected to talk about the opioid situation. Trump made only one brief reference to opioids, but the Presidential Commission on Combating Drug Addiction issued a final report that advanced every one of CURA’s four pillars. 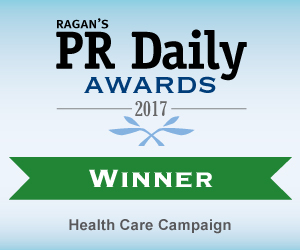