Cigna has made progress in its effort to combat the opioid epidemic, reducing opioid use among its own customers by 25%. As 2018 began, the company wanted to know what was behind the growing use of such substances. It found most people with mental health or other chronic conditions also suffer from loneliness, which affects a huge number of people in a variety of substantive ways. Its response has won first place in the “Thought Leadership” category of Ragan’s 2018 PR Daily Awards.

Cigna opted to spark a conversation about loneliness as a root cause of more acute health issues by ensuring the media reported on research about the impact of loneliness. The strategy underlying the campaign began with research; Cigna found nobody had performed a comprehensive study to understand the impact of loneliness on Americans, leading the company to launch the U.S. Loneliness Index, which found a majority of Americans are considered lonely. The survey results led to Cigna’s action to expose loneliness as a national epidemic and discuss interventions to address the challenge.

Ahead of the campaign launch, the company targeted media outlets during Mental Health Month, including a loneliness series on NBC’s “Today” show. The company’s CEO hosted an influencer event to explore the link between physical and mental well-being and highlight solutions for the loneliness epidemic. 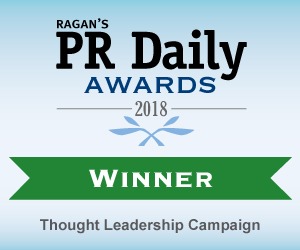