Maviner, a software organization involved in cloud-native networking solutions, contracted with the PR agency Matter for an infographic to showcase at the Mobile World Congress, the mobile industry’s largest gathering. The results have won Matter and Maviner first place in the “Infographic” category of PR Daily’s 2017 Video and Visual Awards.

Maviner wanted an infographic that would focus on the vulnerabilities of the mobile network, drawing information from a variety of surveys and reports and condensing the data into an easy-to-digest visual that would catch the eyes of attendees passing by the Mavenir booth.

Mavenir and Matter also had bigger plans in mind, planning to deconstruct and repurpose the infographic for use in a variety of channels, including an animated motion-graphic video that would also have its debut at the Mobile World Congress. It would also be used for a series of social media posts.

Developing the infographic meant adopting a style that would translate to video as well as smaller, independent social media posts. “The design team created minimalist icons that reflected many of the styles associated with the tech industry,” Matter says. “Every new data point was presented in a modular fashion that could translate more easily to video and social posts later on.”

The tower-format infographic itself is a strong standalone piece, easily scanned and conveying complex data concepts in simple images with very light but compelling text.  Watching the video demonstrates just how well the design team executed its vision and helped the Mavenir booth draw a crowd from among the 2,300 exhibitors Mavenir competed with for conference-goer attention. 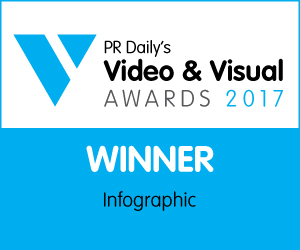