Faced with harsh criticism for its perceived lack of activity in renewable energy, TriState G&T took action to correct the misperception. The utility—a power supplier to 43 electric cooperatives in Colorado, Nebraska, Wyoming and New Mexico—had been actively developing renewable sources and including them in its mix for some time. The video series it created for a TV ad campaign has taken first place in the “Best Overall Video” category of PR Daily’s 2018 Video & Visual Awards.

Beyond altering public perception, TriState’s goals included obtaining 50 million impressions, increasing traffic to its renewables website by more than 100 percent and encouraging its member companies to participate in the campaign.

“Renewable Randy” served as the face of TriState in the videos. Randy is a likable, funny, self-deprecating, plaid-clad spokesperson who reminded audiences in each spot that “Thirty percent of the electricity you use comes from renewable energy.”

The ad series didn’t appear only on television; it was an orchestrated campaign across multiple channels (including social media) that drove public perception of the utility’s adoption of renewable energy sources from literally zero to 56 percent, a remarkable feat.

In addition to broadcast television, the message was deployed via video, OTT/streaming channels, social, virtual reality, paid and earned media and the web, along with nonvideo media like print and radio, digital, editorial, sponsorships and in-person appearances.

The 30-second videos made for TV placed Randy in a variety of scenarios such as solar farms, wind farms and dams. The effort surpassed its goals in a big way, with 34 member systems participating in the launch, 29 requesting the VR component and 35 asking for the life-sized cardboard standup of Randy.

Congratulations to the team at Tristate G&T. 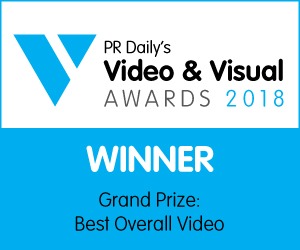